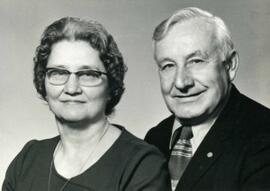 This is the marriage certificate for Bill Kuryliw and Anna Zabolotna. Ceremony conducted by Reverend Peter Kamenesky and witnessed by Peter Oleksiuk and Anne Mateyko.

The series consists of the documentary film about Wasyl directed by his daughter Oksana Kuryliw, a video of the introduction to the first screening, and a poster of the screening event in Edmonton.

This is a poster of the Edmonton premier of the Chapters & Verses documentary held at St. John's Institute on October 27, 2017. Oksana Kuryliw and John Leeson were in attendance to introduce their documentary and answer questions after the screening. The event was organized by the Kule Folklore Centre and Canadian Institute of Ukrainian Studies.

Anna Kuryliw's embroidered purse in which she kept all of her letters. She embroidered it before moving to Canada, a few years before she and Wasyl got married.

The series consists of sheets of paper with poems of Ivan Franko handwritten on them by Wasyl Kuryliw.

The file includes funeral photographs of family members of Wasyl and Anna sent to them from Ukraine, as well as two telegrams from the family in Ukraine to the Kuryliws about family members' passing.

Sewing machine Wasyl sent as a gift to his home village

This is the sewing machine, which Wasyl bought and sent to his home village. Anna is sitting third from the left. She sewed her wedding dress on this machine and brought it with her to Canada where she married Wasyl.

This is a travel document certifying that Anna Zabolotna is healthy enough to travel from Poland to Canada.

A photograph of Wasyl and Anna Kuryliw. After several years of courtship by correspondence, Wasyl sponsored Anna's arrival to Canada, and they got married immediately following her arrival in 1936.