Contains audiotapes and scripts from the radio show Radio Canada International recorded from 1992-1997 hosted by Halyna Klid. The reel-to-reel audiotapes are dated from 1993 to1996 and contain many interviews with various individuals such as Hryniuk, Mykola, Konolyk, Kopotun, Andriievska, Kuchma etc. Some of the audio tape topics also include Leonid Kuchma's visit to Canada, The Joke Project, V-E Day, Hockey, Chornobyl, Perogies, and many more.

The scripts from the radio show from date from 1992 to 1997. They contain the scripts from the interviews with Polkovsky, Starchenko, McCaffrey, Major Dmytro Shkurko etc. as well as scripts from topics such as the First Ukrainian combat jets in Canada, the Men Who Broke the Circle of Women's Traditional Activities, the Alberta Legislature Passes a Motion on Chornobyl, The Feast of Jordan, Ukrainian-Canadian Visual poetry in Canada, a Bukovynian Wedding Show, and many others.

The collection consists of descriptions of Ukrainian wedding customs and wedding songs recorded from Mrs. Olga Savaryn (mother) and Mrs. Olena Prystajecky (grandmother). All songs are transcribed and translated. This collection was a result of a fieldwork project which was part of the assignment for the UKR 422 course at the University of Alberta in the fall term of 1979. 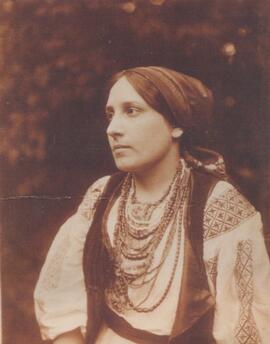 This collection includes songs collected by Ihor Kruk in 1973 in Kuban' from the woman who was born in 1894 and moved to Kuban' in 1905, and proverbs collected in 1977 in Canada.

The collection consists of verses collected in Canada from various pioneers from western Ukraine, and a collection of jokes, proverbs, New Year's verses and texts of other folk songs.

The collection contains materials related to a trial on Ivan Demianuk and support to him of the Ukrainian Canadian community and organizations.

The collection consists of three groups of materials. Firstly, a two-volume "History of Ukrainian art" by Ivan Keywan; secondly, a series of reproductions of artworks by different artists; thirdly, two articles by Ivan Keywan.

Collection includes biographical materials about Lahola and his family, Correspondence between Lahola and different individuals and organizations, Lahola's life during World War 2: his experience in Auswitch, and various other prisons and concentration camps. Includes textual records of Lahola's community life in Canada, published materials, and miscellaneous information. Correspondence includes letters from the Committee for the Construction of the Greek Catholic Cathedral of the Intercession of the Blessed Virgin thanking Lahola for the donation of $100 for the construction of the cathedral (May 17, 1993), letters from the UCC President O. Romaniv thanking Lahola for his $500 donation to the Ukrainian Embassy Foundation in Canada, Ukrainian Public Committee a monument to Taras Shevchenko in Lviv with a request for a donation of money and thanking them for the donation; a letter from the Regional Cathedral of St. John the Baptist with a money donation request; a catalog of the Ukrainian samizdat "Torch" (1985-1986) and letters from the editors about sending books, a thank you letter from the Research Program of Ukrainian Churches for a donation of 10 dollars; greeting cards with Christmas, Easter, Mother's Day, etc. Printed materials include a program of the concert in honour of the first visit of Cardinal Joseph Slipyi on the Congress of Ukrainian Catholics of Canada in Edmonton (June 30, 1968, design of the stage and program of V. Dobrolizh); an invitation to the Ukrainian Day on August 10th, 1980 and the unveiling of the monument by to Leo Mol "Ukrainian Family", an invitation to the Mourning Academy of the 50th anniversary of the Holodomor (November 6, 1983) in Edmonton, along with other invitations and programs.

The collection contains ephemera collected from various Ukrainian Canadian community events in Edmonton, area, and other location across Canada, publications, and art cards.

The collection consists of correspondence, leaflets, and reports related to the fundraising for and subscription to the Encyclopedia of Ukraine (Енциклопедія Українознавства), which the creator collected as a representative of the "Encyclopedia of Ukraine" dissemination in Alberta and a treasurer of the Patronage NTSh-EY-2 in Edmonton. The other part of the collection is comprised of the documents related to the Alberta fundraising for the Leonid Pliouchtch family in France. The collection also includes a rare collective photo from 1936 or 1937.

The collection consists of field materials collected by Jason Golinowski during his master studies at the Ukrainian Folklore program, University of Alberta, as well as essays on a wide range of Ukrainian folklore topics, such as Ukrainian crafts, rites of passage, folksongs, celebrations, personal narratives, and others.

The collection consists of an interview conducted by Jeanne Ferguson with Dr. Bohdan Medwidsky. The Interview was recorded at the Ukrainian Folklore Centre at the University of Alberta.