The collection consists of an essay that analyzes comic elements of Walter Rutka's album "The Ukrainian Cowboy", and an audio cassette, which is a field recording of Walter Rutka singing the following songs: 1) Mansion on the Hill, 2) Bashful Dancer, 3) Homebrew, 4) Lara's Theme, 5) Pryvit, 6) Kolomyika, 7) Molodyi Viter.

The collection consists of papers accumulated over the years by John Yaremko. It includes twenty-two letters from his nephew Mike Kotyk, ten letters from Mike Zahara, letters and postcards from Makuch, M. Mузика (M. Muzyka), Jackowsky, John Diakun, В. Вернюк (William Werniuk), Mike Lazoruk, and several letters from the government. There are also other documents such as tax payment receipts, meal tickets, the Workers' Benevolent Association of Canada membership card, unemployment relief card, 'notices of distress,' a filed lawsuit, etc. Yaremko's photo was taken around 1920s. His biography was written by Rose Kotyk in 2003.

Eight letters from the Klapouszczak family members in Pastushe village (in 1920 in Poland, then in the Soviet Union, now - Ukraine) to relatives in Edmonton, Alberta.

This collection consists of the following groups of materials: 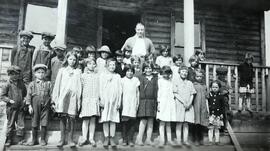 The collection consists of personal documents of William Kostash, documents related to Mary Kostash's teaching career, family and professional photographs, and correspondence between Mary and William, as well as letters from Mary's students.

The collection consists of photographs of the event organized by the KuFC to celebrate Ukrainian Christmas in January 2019. The event was held at the Student Lounge at the Arts & Convocation Hall, University of Alberta, and was well attended by people from MLCS, Arts Centres and Institutes, and Ukrainian Canadian community. Traditional Ukrainian Christmas dishes were served and carols were sung by the participants.

This collection includes an essay on proverbs, riddles, and sayings along with a book review for the courses Ukrainian 423 and Ukrainian 422.