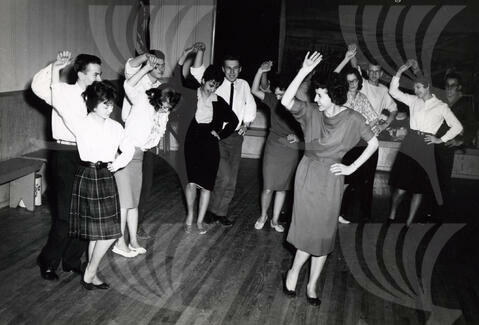 Nadia Korpus was born in Regina, Saskatchewan on the 18th of August 1929. Her father, Peter Korpus (Korpesio) was born in Malniv, Ukraine in 1897 and followed his older brother, John Korpesio to Canada in the early 1920s. Nadia’s mother, Olga Wawruck, was born in Hubbard, Saskatchewan in 1903. Her parents had arrived in Canada in 1899 from Koshlyakeh, Ternopil Oblast, Halychyna, Ukraine. Peter and Olga were married in Hubbard in 1926, and settled in Regina where they soon started a family. Their oldest son, Roman (Raymond), was born in 1927 followed by Nadia in ’29. Nadia’s younger brother Donald (Donny) was born in 1930, and her younger sister Patricia (Pat Sembaliuk) was born later in 1935.

She was active in the Ukrainian National Federation and the Ukrainian Orthodox Church of Canada. Her passion for Ukrainian Culture was further encouraged through participation in the summer school “Kursy” which she attended in 1946-48. Nadia is noted for establishing the Rusalka Dance Ensemble in Calgary (1961-67), and having inspired many Ukrainian dancers, both male and female, to continue dancing and teaching across the prairies.

Donated to the Archives by Nadia Korpus through her niece, Larisa Sembaliuk Cheladyn, in 2016.