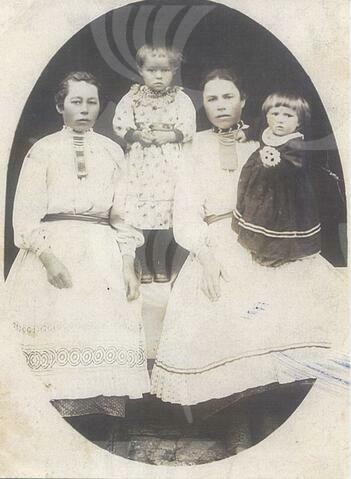 Opryshko family comes from the village Wisłok Wielki situated in the eastern part of Lemko land. Since 1918 this region has been within the Polish state. Members of Opryshko family received school education at primary school under the rule of the Austro-Hungarian Empire in Ukrainian. Ivan Opryshko married Maria Luchka in 1925. He came to Canada at the age of 24 in 1928. He reached Winnipeg where, thanks to Saint Raphael’s Ukrainian Immigrants Welfare Association of Canada, he met William Romaniuk, a local municipal administrator from Mundare, Alberta, with connections with farmers from the Mundare-Andrew area. Along with his two friends, also from Wisłok, Ivan was taken to work on a farm, where he spent next 6 or 7 years. Ivan's sister, Fenna, came to Canada in 1930 and settled in Vancouver. Ivan stayed in contact with Fenna and visited her in Vancouver in 1947 or 1948.

Ivan and Maria were reunited in 1932. Ivan located a homestead in Prosperity to which they moved. For Maria, the move to rural Canada was a great cultural shock, because of differences in climate, landscape, pattern of settlement, distances, community life, etc. She worked on the farm and never learnt fluent English. There was no need as many of their neighbours were Ukrainians, and Ivan had learnt enough of the language.

Mariya had 4 brothers and a sister. Paraska, her older sister and her brother Mychal were sent or chose to go to Ukraine. Paraska and her daughter Anna who remained in Poland, were displaced to a village of Dobrusha in the western part of the Soviet Ukraine in 1946. Anna Chekanska lived in Ternopil. Fedir, her oldest brother, and brothers Ivan and Andriy were displaced to the north of Poland.

Ivan had 4 brothers and 2 sisters. Petro and Fitcho were sent with their mother to Ukraine. In 1946, Petro and his family were displaced to a village of Kal’ne in the western part of the Soviet Ukraine. Mychal was displaced to the north of Poland (he later returned to Wislok). Maxymilian, the youngest brother, was taken to Nazi Germany for forced labor during the war, spent 3 or 4 years in Buchenwald. After he returned to Wisłok, he joined the Ukrainian Insurgent Army. During the displacement he was imprisoned in the Labour Camp of Jaworzno for 4-5 years. After leaving the prison he went first to Northern Poland and returned to Wislok.

Many of Maria's and Ivan's relatives, for example, Ivan's brother Petro, wrote to them to Canada.

The letters were donated by Peter Opryshko.