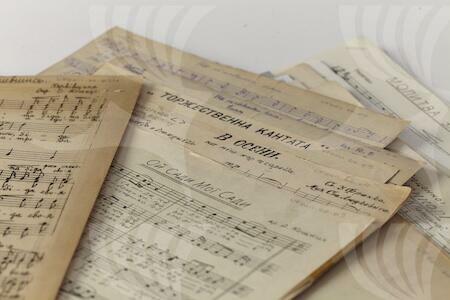 Rev. Wolodymyr Sluzar was born in Chunkiv, Bukovyna in 1895 and immigrated to Canada in 1923. He was ordained shortly after his arrival and served in several parishes in Saskatchewan before moving to Montreal to establish the first Ukrainian Orthodox parish in Eastern Canada. He retired in 1972 and died in December of 1976. As well as being an ordained priest, Rev. Sluzar was a choral conductor, and so his personal collection of sheet music is extensive.

Rev. Wolodymyr Sluzar was born in 1895 in a small village called in Chunkiv, Bukovyna. His educated parents sent him to a boarding school in Chernivsti where his musical talents soon became evident because he learned to play the violin and loved to sing in the school choir. Soon enough, he became the school choir conductor, which became his life long hobby. By 1914, Wolodymyr was 19 years old and was recruited into the Austro-Hungarian Army. He was enrolled by his superiors in the officers training school.

After the World War I, he joined the army of Western Ukraine — the Halyts'ki Sichovi Striltsi. He became a high ranking officer and fought for the freedom of Ukraine, which ended tragically, in failure. Even under these difficult circumstances, Sluzar started collecting Ukrainian music, secular, sacred, printed or hand copied. Future wife of Wolodymyr worked at the same army headquarters where he was stationed. They met and were married in 1920 with an honour army group in attendance. The war for Ukraine was drawing to an end. The Sluzars decided to return to Chernivtsi. There, Wolodymyr enrolled at the University Faculties of Law and Theology. Bukovyna became part of Romania, and authorities were quite hostile to Ukrainian patriots. The SLuzars decided to emigrate to Canada.

Soon after arriving, Wolodymyr made contact with the newly established Ukrainian Orthodox Church of Canada. After some further coaching and training, he was ordained into the priesthood in 1924. In 1926, he was assigned to go to Montreal to establish a new parish. In addition to his many new and arduous pastoral duties, his love of choral music quickly led to the establishment of a church choir. There was no lack of singers. Their repertoire grew quickly since Rev. Sluzar already had a fairly large collection of Ukrainian secular and sacral music. Whenever he had to travel to other large cities, he would return with more music to add to his collection. Montreal in the forties and beyond was a hive of activity with frequent patriotic concerts organized by the local branch of the Congress of Ukrainian Canadians.

The collection was donated to the Bohdan Medwidsky Ukrainian Folklore Archives at the University of Alberta in 2011 by Dr. Roman Sluzar, son of late Reverend Wolodymyr Sluzar.

Handwritten scores have been digitized.