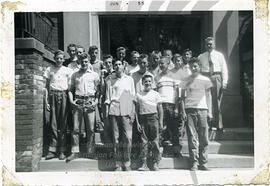 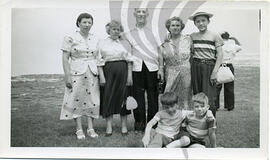 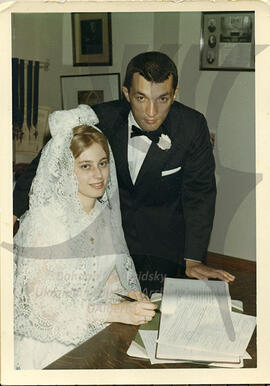 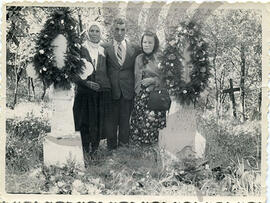 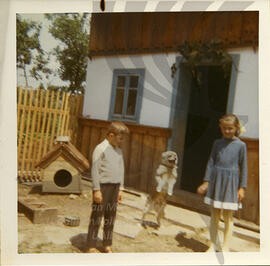 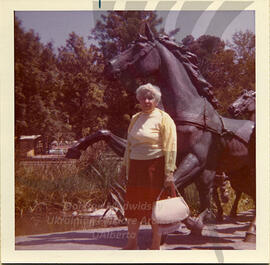 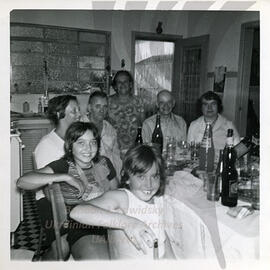 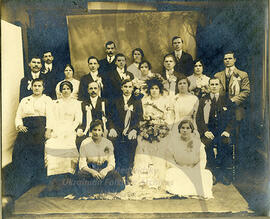 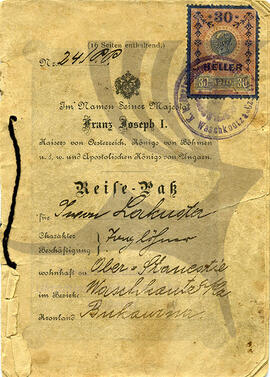 The collection consists of liturgical music, including Entrance and Recessional, Hymns in Honour of the Mother of God, Holy Spirit, Holy Eucharist, Various Saints, Tropars, Easter; and music scores and lyrics of Ukrainian folk songs (calendar cycle). It has been organized in three series: Folk music, Religious music, and Plast Song Books (self-published).

Was born on ?????? (cannot hear) 14 , 1901 in a village of Peremeliv of the Huchatyns’kyi povit. He is a Greek-Catholic. Had 2 older sisters. After serving in Polish army, came to Canada in 1927. During WWI was fighting in the Halyts’ka Ukrains’ka armiia. Had 4 grades of education (in a village school). He was almost 17 when he was forced to go to the Ukrainian army. Was fighting in Zolochiv, Babyna Hora, Pidhaichyky in 1918. Ran away home from the front. The Poles came and occupied them. He was forced to join the Polish army. He was then near Warsaw in 1922. There was, though, no discrimination against Ukranians in Polish army. He chose to go to Canada because the family had no means to survive. There was his extended family in Canada (left in 1899). He loaned money for the trip from wealthier villagers and had to pay back 70% interest. He made sure not to work on a farm but for a company (only during the Depression he would work on farms). On May 8, 1927 he already came to Edmonton. They did not let them get off in Winnipeg but made them go to Edmonton for an additional price of $7. Was lucky to get a job in a forest. Then work on harvesting. went to Lamont and got a job on a farm of an Englishman; then on a border between Alberta & Saskatchewan. Then worked in Genek (???). Then went to Winnipeg in the fall of 1928. During the Depression he belonged to the Ukrainian organization “KROV” (???)
When was forced to join the Ukrainian Army in 1918 he was charged with desertion, and got 25 beatings.
During the Depression he had multiple little jobs that paid little. He married a Ukrainian woman in 1937.

Part 1: Born on May 23, 1900 in a village of Hadynki (???) Buchatyn povit (??)
In 1918 was conscripted to an Austrian army. His father was interned by the Poles. Came to Canada in 1926 (his cousin sent him an affidavit from Canada), to Saskatchewan where his cousin was working on a railway. In 1928 he came to Edmonton. In Patfiner (??) was a Narodnyi Dim. In Edmonton, there was Narodnyi Dim and Instytut Hrushevs’koho. Ukrains’ka Strilets’ka Hromada appeared in 1928. Communitsts vs. Sichovi stril’tsi. Bohdan Zelenyi (??) as the first head of Strilets’ka Hromada. UNO was organized in 1932. Colonel Konovalets’ from OUN came to Edmonton in 1928 asking for support. Also, Mel’nychuk visited, Shushko, and several other known personalities. Lawyer Mr. Romaniuk in Toronto had most contacts with Konovalets’. Ridna shkola was organized in about 1931.

Nee Kachuriak was born on May 10, 1909. Had 6 siblings. Father was sent to the Siberia for 4,5 years. Her husband went to Canada in 1926 and she joined him in 1932 (travelled from Rotterdam to Halifax). Her husband organized building a Ukrainian church in Timmins (Pashchyn (???), Podolian, Plaskovis (???). Mr. & Mrs. Rysak; Mike Tyshliuk; Mr. & Mrs. Klapushchak as donors) in about 1945. UNO Hall (Roshchyns’kyi (??), Slots’kyi (??)). Orthodox priest had services in the Hall. Communists. ‘Ridna shkola’; Father Horoshko, Motryns’kyi; a fight after selling the Natsional’nyi dim; DPs; discrimination of Ukrainians in the 1930s; Women’s organization.

Part 1: Born in 1914 in Halychyna, in a town between Lviv and Ternopil; his father was a POW during the WWI and died soon after release; mother remarried a man with the same last name (Dubas), who went to Canada in 1926, while Michael, his mother and half-sister joined him in 1931; they went on a Samara ship (Warsaw - Belgium - Paris - New York - Montreal - ?????); 1929- Pacification in Halychyna; Semenchiv (??) in Ukrainian community in Canada, helping Karpatska Ukraina; Ukrainians in concentration camps; he is Ukrainian Catholic; local Communists, Mrs. Zavads’ka (??); Dubas’s 5 children; his wife’s (nee - Mykolaichuk); relations of Ukrainians with the French and English in Canada; Bohdan Mykytiuk (??); WWII, Dubas’s brother was in the army; DPs.

Part 1: Born on January 17, 1913 in Toronto; his parents came in 1908 from Halychyna; had a brother and 3 sisters; attended Ukrainian classes; after High School decided to be a priest, got a degree in University of Eastern Ontario; he did not know Ukrainian when he went to school; Ukrainian National Federation; Ukrainian Communists, Labor Temple; Dr. Riadkevych(??); Fr. Hryhoriichuk (??); Fr. Coldson (??); Fr. Kryvuts’kyi; Fr. Hryhoriichuk (???) established ???????? students in Toronto; Dzutman on becoming a priest; his parents had personal experience with discrimination; Orthodox church in Toronto; Bishop Kib (??) of London; Fr. Mavryk (???) was a long time secretary to Bishop Ladyka (??); an Eastern Right Day in the seminary; Fr. Labar (??); Ukrainian National Federation and its choir; Mrs. Hlushko (??); the Semchyshyns (??); description of the Ukrainian community of London before the war; working to Portage-La-Prairie; Prosvita in Portage-La-Prairie; CUC; korovai in Ukrainian weddings.

Part 2: Coming to Toronto; services in French Catholic church; 3 parishes in Toronto; Ukrainian carols on the Trans-Canada Ukrainian radio program; Belshinskyi (??) - President for Eastern Canada; Mr. Loratskyi (??) took over the choir; Dr. Kapusta (??); Sudbury after WWII; children summer camp run by the nuns; after Sudbury went to the missionary assistants; then moved to Sault Ste. Catherine (??) - a small parish; then a parish in Hamilton; then to Windsor for 12 years; accommodating to mixed marriages; difference between pre-war and after-war parishes; local Ukrainian Communists; the future of Ukrainian parishes.

Part 1: Born in 1902 in the village of Toporivtsi, in Horelenka povit, Halychyna; his wife - Mariia Markovs’ka; he came to Canada on June 15, 1928; WWI events, occupation of Halychyna and Subcarpathia, Austrian army; he had 10 siblings; he returned from the army in 1925, married in 1927; Sotsialistychna radykal’na partiia; went to Canada with 2 his neighbours (Gdansk - Liverpool - London - Quebec), then via Winnipeg to Kryla(???); trip cost $180 + $50 “for the show”; then came to work to Prince Island - Jasek Morawsky(??); Ukrainian identity; Sichovi stril’tsi, Chytal’nia; going to Prince Island; Vasyl’ Vasylyniuk; hard manual labor on a construction of a mill (??).

Part 2: Hard work in a mine, was fired; coming to a town of Depres (??) in 1930; elections in 1930; working 75 miles way from Port Church (constructing roads), quitting; going to Winnipeg; Robitnycha orhanizatsia in Dupas (??) in 1930; Communists; his sister came to Canada in 1930; Vasyl’ Horobets’ (??); priests; his sister helped him to get a job; nationalists built their hall in Hudson Bay; back to working in a mine; Robitnychyi Dim (Vasyl’ Mykytiv (??), Ivan Markovs’kyi, Stefan Kryzh, Ivan Parastiuk, Vasyl’ Maiborod (??)), he was a secretary for a short time.

Part 3: Robitnychyi Dim, Communists; when Gryschuk was a Secretary, Vasyl’ Mandryk was the Head; women’s section of Robitnychyi Dim; WWII, Police suspecting Communists from their organization; unions, union strikes; Hutchinson (??), looking for a job in Timmins during the strike; elections at the Robitnychyi Dim; plays in the amature thatre; finding jobs for Communists; DPs; Konovalets’; WWII, Stalin’s Pact with Hitler; Skrypnyk; Gryschuk’s visit to Ukraine; strike in Timmins in 1953 (3 months long); a coop in Timmins; turning their Hall into a museum of Ukrainian culture.

Part 4: Narodnyi Dim; connections with other ethnic groups; local church (priest fled to the USA in 1936 after a scandal); history of religion: Bishop Iosyf Akutsynskyi (??); haiduky and turning Orthodox people into Catholics.