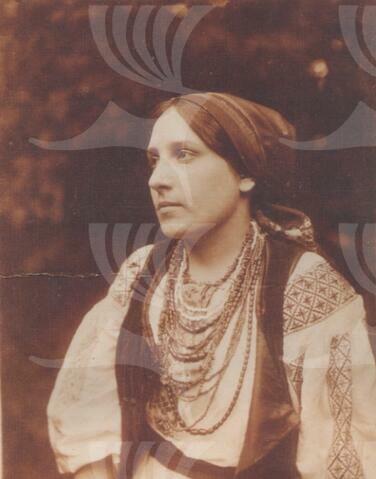 Ivan Honchar was a prominent Ukrainian activist, sculptor, artist. He was born on January 27 1911 in Lyp'ianka village of Kirovohrad region (today the village is part of the Cherkasy region). He studied art, drawing and sculpture the Kyiv Art and Industrial Professional School and graduated as a sculptor-decorator. While in school, he was renting a room from Maksym Korostash, a musicologist and folklorist. There he met Klymentii Kvitka and Olena Pchilka.

Honchar created numerous sculptures and monuments in many cities and villages across Ukraine. In 1960s-80s he created art albums with photographs and descriptions of folk costumes from different regions of Ukraine, architecture, folk art. Honchar did ethnographic fieldwork, and in 1970-1993 he created 18 volumes of historical-ethnographic albums "Ukraina i ukraintsi" [Ukraine and Ukrainians] based on photographs of the beginning of the 20th century and historical and ethnographic research.

He passed away June 18, 1993. In September of that year, a museum named after Ivan Honchar was created in Kyiv. His private collection of folk art became a foundation for the new museum. In 1999, the museum was renamed the Ukrainian Centre of Folk Culture "Ivan Honchar Museum". In 2009, it became a national museum.